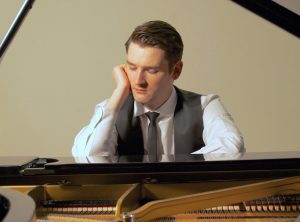 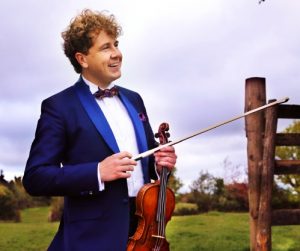 Belfast-born Michael McHale has established himself as one of Ireland’s leading pianists and has developed a busy international career as a solo recitalist, concerto soloist and chamber musician.

Michael’s début solo album The Irish Piano was released in 2012 by RTÉ lyric fm and selected as ‘CD of the Week’ by the critic Norman Lebrecht. More recent solo releases include Schubert: Four Impromptus on Ergodos, Miniatures and Modulations on Grand Piano, and a first orchestral album Irish Piano Concertos featuring works by John Field and Philip Hammond with the RTÉ National Symphony Orchestra and conductor Courtney Lewis. His discography of over twenty albums includes releases on Delos, Nimbus Alliance, Champs Hill, and seven duo recital albums on Chandos with Michael Collins. The début album of the McGill/McHale Trio Portraits on Cedille featuring special narrations by Oscar-winner Mahershala Ali was released in 2017 and immediately entered the Top 25 US Billboard Classical Chart. Upcoming releases include a recording of Strauss’s ‘Burleske’ with the BBC Symphony Orchestra on Chandos, and a recording of two new works by Cliff Eidelman with the London Symphony Orchestra.

In 2017 Michael was invited to become a Patron of the Ulster Youth Orchestra, and in 2018 he was appointed as a part-time professor of piano for undergraduate and postgraduate students at the Cork School of Music in Ireland.

“…McHale was a wonderfully incisive soloist… this was exactly the sort of headlong, exciting adventure that Prokofiev intended it to be…” Michael Dervan, Irish Times

Regarded as one of Ireland’s most outstanding musicians, international award winning violinist Patrick Rafter has performed extensively throughout Europe, South America, Asia and the Middle East as Concert Violinist and chamber musician, and currently studies under Maxim Vengerov and Oleg Kaskiv at the International Menuhin Music Academy Switzerland.

Born into an exceptionally musical family in Kilkenny, Ireland, Patrick quickly became recognized as a prodigious talent after winning all age divisions for string instruments at the mere age of 12 in the Kilkenny Music Festival and went on to receive a full scholarship to study at the Royal Irish Academy of Music (RIAM). Patrick studied from 2003-2005 with Eyal Kless and subsequently with Fionnuala Hunt from 2005-2011. During his time at the RIAM, he won all conservatoire string competitions, whilst also winning national awards such as the Arthur Nachstern Bursary.

In October 2015, Patrick was personally invited to study under Maxim Vengerov at the International Menuhin Music Academy (IMMA),  Switzerland and has performed as soloist and concertmaster with IMMA’s chamber ensemble the Menuhin Academy Soloists.

As a conductor himself, Patrick has directed the RTE Concert Orchestra in the finals of the RDS Feis Ceoil and has taken choral masterclasses with distinguished names such as Zoltan Pad and Volker Hempfling.
In Patrick’s hometown of Kilkenny, he was awarded ‘Kilkenny Person of the Year’ and returns to give sell out concerts alongside his family. Patrick is incredibly grateful to play on a Georges Chanot violin kindly supported by the Department of Arts, Heritage and the Gaeltacht. He is proud to be an ambassador of Musafia Cases of Cremona, Italy. His violin is housed in a beautiful Master Series Violin Case

The University of Wonder & Imagination is now enrolling students of all ages and magical abilities ... and there’s a place with your...
View on Facebook
·Share

Artists Susan Mannion and Matthew Gammon have created a quiz and exhibition for the town of Boyle. The idea behind the quiz is to encourage people to engage with the heritage of Boyle Town through a walking tour. The questions for the quiz will be spread over the windows of ten businesses in town along with examples of Susan’s enamel artwork. Although many of the answers to the questions can be found online, the information required to answer all of them can be found on the many information boards and commemorative plaques located throughout the town.

The initiative aims to make more people aware of the interesting and diverse heritage of the historic town of Boyle whilst encouraging them to cast a fresh eye over the townscape and the local businesses. Susan explains “I wanted to create a quiz with associated artwork for the people of Boyle, something fun to do for all the family during these tough times, that people could access safely and hopefully they may win a piece of artwork at the end.”

The starting point for the quiz is at the window of the Roscommon Herald Office, Bridge Street, Boyle. It will commence on Tuesday 13th October and the closing date for entries is Saturday 24th October. Entries can be either emailed to boyletownquiz@yahoo.com or written on paper with your name and contact details and dropped into Una Bhan Tourism in the grounds of King House, Boyle. A draw will then take place of the correct entries after the closing date, with the winner receiving an enamelled vessel and the runner-up a smaller vessel.

To find out more about the enamelling process that Susan uses to create these works, you can go to her website, www.susanmannion.com to see a short film.

This marks the first in a series of music commissions by Roscommon County Council, in celebration of the grand piano at King House.
The commission invites composers to respond with a work for small ensemble (approx. 4 players). This work must include piano and should be developed in collaboration with a pianist. The 2020 commission (for performance in 2021) should cross the genres of classical and traditional Irish music. The piece will be premiered by the ensemble at a concert during Boyle Arts Festival 2021 (15th – 24th July).

The commission is funded by the Arts Office of Roscommon County Council together with the Arts Council of Ireland, in collaboration with Boyle Arts Festival and in association with the Contemporary Music Centre.

For further details on the criteria and application process visit:
https://www.cmc.ie/opportunities/king-house-piano-commission-20202021

We are delighted to announce that Naomi Draper has been appointed as our Curator in Residence with the support of The Arts Council.

Naomi is an artist and educator based in Boyle, Co. Roscommon. She graduated from NCAD with a Bachelor of Design specialising in glass in 2007. Following an Erasmus programme at the Academy of Art, Architecture and Design, Prague, she received a scholarship to attend Pilchuck Glass School, Seattle. In 2011, she completed a Postgraduate Diploma in Community Arts Education at NCAD.

Naomi has participated on a number of residency programmes within contemporary art institutions, community and educational contexts; including the Mattress Factory, Pittsburgh, LOCIS Residency at Residence Botkyrka, Sweden, The Model, Sligo, and The Harrington Studios, Boyle, Co Roscommon.

Welcome Naomi - we look forward to working with you.