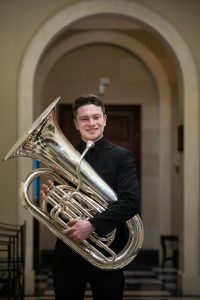 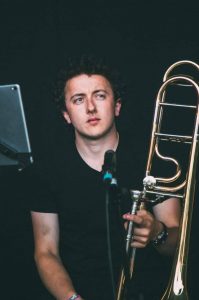 Currently in the third year of his Bachelor of Music degree, Jack Cullen has been playing tuba since he was 11 years old. Having started off with joining the Crumlin Youth Band, he has found himself playing in many different types of ensembles around Ireland, including concert bands, orchestras and chamber ensembles.

Jack has studied the tuba with Francis Magee at the Royal Irish Academy of Music, and is currently under the tuition of Conor O’Riordan at the DIT Conservatory of Music and Drama. Jack achieved success in the 2018 Feis Ceoil, taking first place in the Senior Brass Recital competition

Kieran Sharkey is a Dublin-based Trombonist from Donegal. He is currently in his third year at DIT Conservatory of Music studying BMus Performance in Trombone under the tuition of Mr. Jonathan Clifford. He began taking trombone lessons at the age of 12 with his local brass band in Glenties, Co. Donegal.

ecently Kieran has taken part in the RTE National Symphony Orchestra mentoring scheme and also performed with the RTE Concert Orchestra for RTE radio 1. Solo engagements include performing with Dublin Concert Band in the National Concert Hall for the bands 60th anniversary. Kieran has also performed in recitals for TU Dublin Piano department in the John Field Room, NCH and also for a Ulster Youth Orchestra fundraiser recital.