Barry and Jim will be in conversation with Oliver Fallon. Oliver’s discussion with Jim and Barry will examine the influence Horslips brought to the Irish and International music scene in the 1970’s and focus on their classic second studio album, ‘The Táin’

Barry Devlin  whose series My Mother And Other Strangers recently ran on BBC One’s Sunday night slot – has written extensively for film and TV: from series like Darling Buds of May and mini series like Soul Survivors and Runway 1 to features like All Things Bright And Beautiful and A Man Of No Importance.

His day job is still as vocalist and bass player with Irish Celtic Rock legends Horslips – who are currently hugely enjoying doing The Lament for Art O’Leary with Paul Muldoon, Lisa Dwan and Ruth Smith. 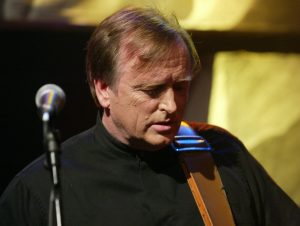 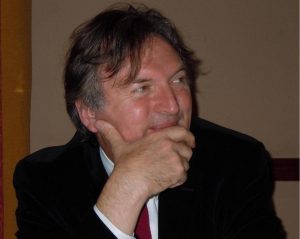 In 1971 Jim Lockhart turned away from a career in environmental economics and ran off wth a rock’n’roll band, which became the legendary Celtic Rock pioneers Horslips. Ten years and 13 albums later, they hung up their guitars and Jim joined RTE, where he continues to produce and present music and documentary programmes, while keeping his hand in as a musician and film composer. 2009 saw the band reform to great acclaim. Jim is married with three adult children.

Oliver Fallon is a native of Boyle, Co Roscommon and has contributed to numerous television and radio documentaries and publications. He has also been a regular contributor to Boyle Arts Festival, over the years.

« The Martyrs» Two Divas and a Piano: “Love Bites”